Chefs Sergio and Javier Torres and their team of sommeliers (Pablo Sacerdotte, Koldo Rubio, Azahara Muriana and Zoltan Nagy) took the initiative in organising a lunch to pay tribute to Antoni Mata Casanovas, the chairman of Recaredo. The event was held yesterday at the Cocina Hermanos Torres restaurant in Barcelona. “Be grateful to those you learn from.” According to Pablo Sacerdotte, a sommelier on the Torres team, this was the principle the organisers had in mind when they came up with the idea of bringing together some of the top figures in the restaurant industry to pay a warm, intimate tribute to “someone who’s taught us so much about sparkling wines and who has such a great appreciation for the broader world of gastronomy”. 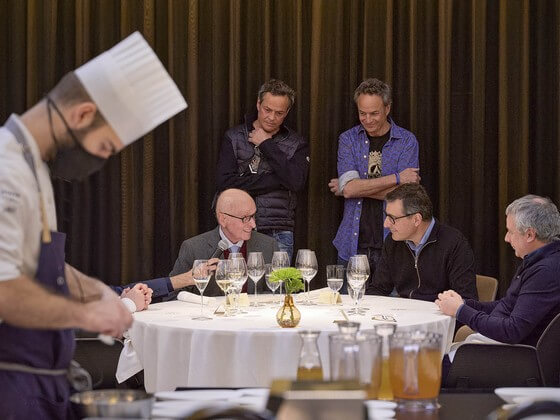 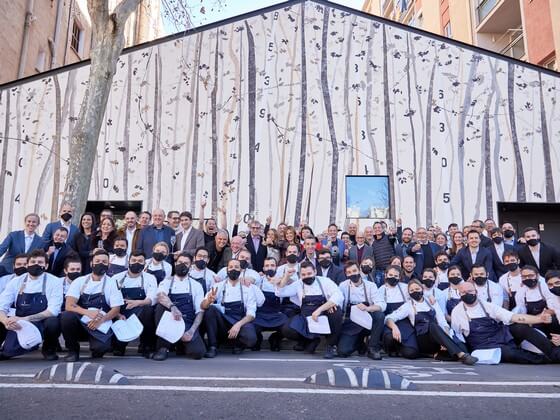 Antoni Mata said he felt “immensely pleased and honoured” about the lunch at Cocina Hermanos Torres, which gave him a chance to meet once again with the “great gourmets, kitchen professionals and sommeliers, whom I admire so much, from whom I learn so much, and whose ability to convey an infinite passion through their work I deeply value”. 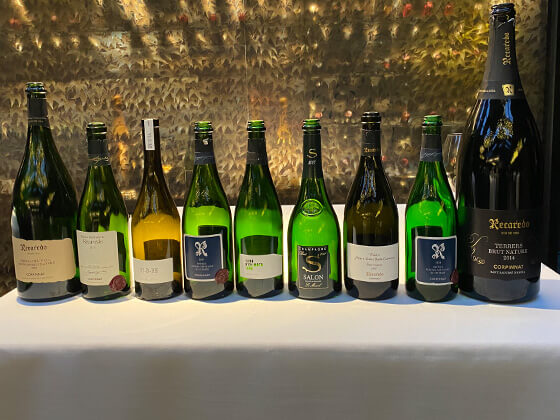 Enoteca de Reserva Particular de Recaredo 1984, Tribut 1996 and Turó d’en Mota 1999 were some of the wines tasted during the event.

The gastronomic offering prepared by Cocina Hermanos Torres was accompanied by a very special selection of wines from the Recaredo family collections, including the 1984 vintage of Enoteca Reserva Particular de Recaredo, aged for 36 years and nine months; Tribut a Josep i Antoni Mata Casanovas 1996, and the iconic Turó d’en Mota 1999 – all served in Riedel glasses from Euroselecció carefully selected for the occasion. 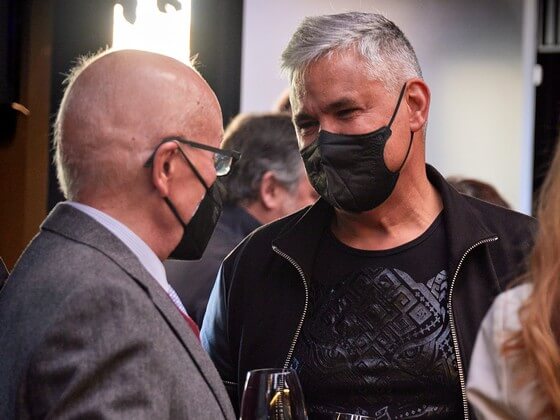 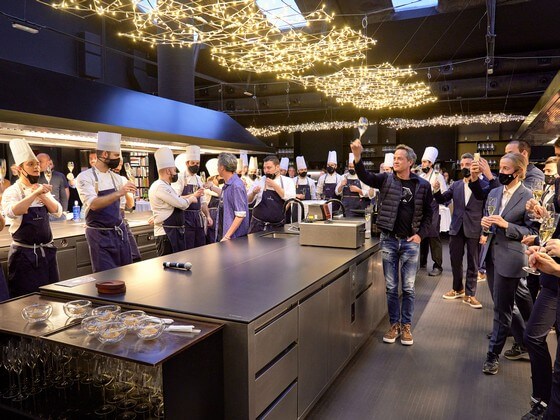 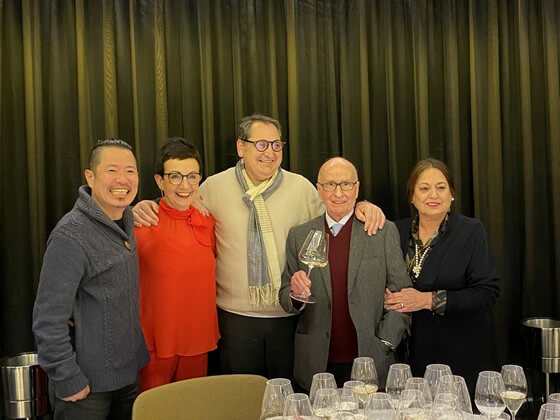 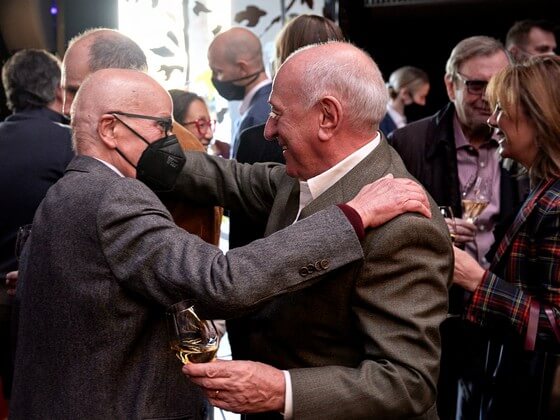 Antoni Mata Casanovas was born on 28 April 1942 in Can Credo, the Recaredo family home in Sant Sadurní d’Anoia. By the age of seven, he was already stirring yeasts, stood atop a cask in the cellars founded by his father. An eagerness to learn and improve drove him to study oenology and viticulture in different parts of Spain – in Logroño, Vilafranca del Penedès, Madrid, Valencia and Valdepeñas. He also deepened his knowledge by making countless trips to wine regions all over the world. 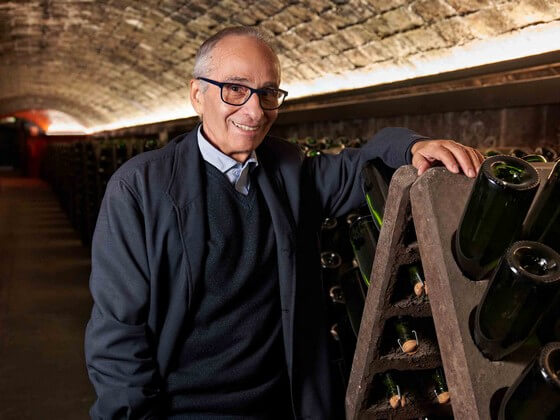 In his career, certain key decisions taken together with his brother, Josep Mata Casanovas, and his father, Josep Mata Capellades, are particularly significant, among them, their decision to focus on making long-aged brut nature cavas and to continue using natural cork stoppers during ageing for the entire Recaredo sparkling wine collection, an approach that went against the grain at a time when industrialisation of the sector led to the introduction of crown corks and machinery to automate production processes.

Together with his brother, and with the involvement of members of the third generation of the family, Antoni was the architect of Recaredo’s deep commitment to viticulture, which translated into a business model that revolved around managing its own vineyards. This commitment led him to direct the winery’s steps towards the production of vintage sparkling wines that could express the essence of unique plots and estates with special characteristics. “We can’t uproot this vineyard,” he exclaimed when he set foot in the old vineyard of Turó d’en Mota. Thanks to this clear-sighted decision, the first vintage, Turó d’en Mota 1999, was produced and became the first single-vineyard cava in history, the first single-varietal Xarel·lo, and the first sparkling wine in Spain aged for over a hundred months.

A tireless reader with a great capacity for learning, Antoni Mata has managed to drive the family project forward based on a broad vision of the business. He has worked tirelessly to lead Recaredo in management, creativity and oenology, and as the winery’s most prominent representative. Antoni has been able to combine these diverse roles thanks to his tenacity and constant drive to excel.

Antoni Mata is retired but still actively pursues his passion for the great wines of the Penedès region. Even today, he continues to develop wines such as Vi-d-re, a single-vineyard wine made in collaboration with the Celler Credo team. Antoni explains that the name refers to Recaredo, to vidre (“glass”), and to the fact that nothing is added (res afegit in Catalan). “That’s how we came up with the name for this Xarel·lo wine, which is fermented, aged, and corked only with conical cork stoppers, without coming in contact with any other material. Vi-d-re is intended to express the purity of a wine made with minimal intervention,” he said. 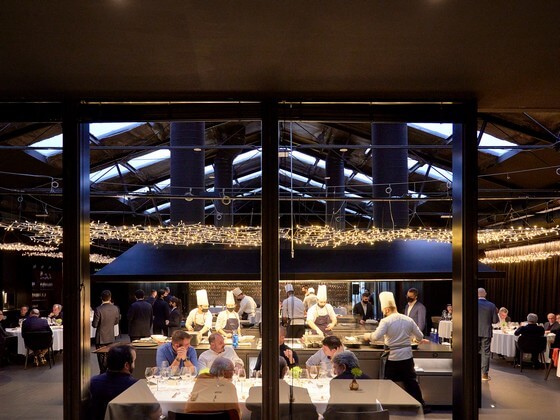 The Corpinnat Gastronomic Festival has cemented its status as a standout food and wine experience for discovering Catalonia’s restaurants in the most beautiful spaces of wineries located in the heart of the Penedès region.

Recaredo’s vineyards used as setting for ‘Heirs to the Land’

Recaredo’s estates have been used as a setting for the television series based on a novel of the same name by the writer Ildefonso Falcones.

Recaredo with the campaign ‘Wine Tourism for Health Professionals’

The initiative was born with the aim of thanking and rewarding the efforts of professionals in the field of health and other essential sectors during the COVID-19 pandemic.

We’re reopening our doors to visitors

The Recaredo family and team are pleased to announce that the doors of our winery are now open to visitors. Now, more than ever, it’s time to regain a taste for life together.

“Let’s bring back the joy” is an initiative in which Recaredo and Celler Credo will make their facilities available to local dining establishments to help relaunch the restaurant sector.

Recaredo is once again collaborating with the Verema Solidària, an initiative of the association Impulsa Fundraising that combines territory, wine and social responsibility, to combat poverty and social exclusion.

This year, the second edition of the event will raise money for projects aimed at increasing social inclusion of people with intellectual disabilities in the Penedès and Empordà region.

The TV programme Catalunya Experience paid a visit to one of Recaredo’s most singular vineyards with two Japanese sommeliers to highlight the authentic character of terroir sparkling wines.